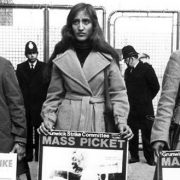 In this article Phoebe Brown analyses media representations of the 1976-1978 Grunwick industrial dispute. Phoebe focuses on the role of the South Asian women involved, analysing a variety of media sources and highlighting how they emphasised particular aspects of the strikers’ identity  to serve diverse political agendas: the right-wing press, for example, emphasised the women’s ethnicity and gender to undermine their position as workers and political activists so as to not disrupt their prevailing ethnocentric vision of the social order. The socialist media, on the other hand, emphasised the women’s position as workers and political activists, depicting the Union movement as inclusive of minorities. Overall, Phoebe highlights how and why the media representation of the strikers did not acknowledge the complexity of the South Asian women’s identities. The ‘othering’ of the South Asian women and the media’s reinforcement of various stereotypes demonstrates how difficult Britain found transitioning to an increasingly diverse, post-colonial society. Contemporary interpretations and commemorations of the Grunwick dispute provide further evidence of how this transition may, as yet, be far from complete.

Phoebe Brown graduated from the University of Nottingham in 2017. This article formed part of Phoebe’s undergraduate dissertation supervised within the Department of History.